How to unlock Rick Sanchez from Rick and Morty on Fortnite

Impersonate your favorite character within Fortnite it is a desire shared by many. In this context, the popular video game developed by Epic Games has accustomed fans to the constant arrival of news in this sense, "drawing" from particularly popular narrative universes.

On the other hand, the success of the title in question is so high that now the developers do not seem to have many problems in forging important partnerships. You know it too well and in fact you are wondering how to unlock Rick Sanchez from Rick and Morty on Fortnite, that you know to have landed in the game world and that you can't wait to be able to impersonate in your online adventures, since you have always appreciated the genius of the animated series created by Justin Roiland and Dan Harmon.

If this is indeed the case, know that you have come to the right place: below, in fact, you can find all the necessary indications to achieve your intent. Having said that, there is nothing left for me to do, except wish you good reading and have fun! 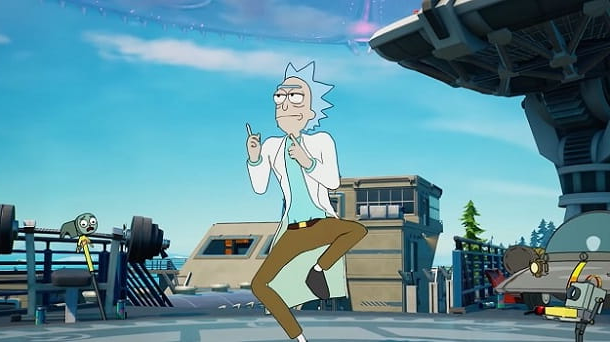 Before I tell you the procedure on how to unlock Rick Sanchez from Rick and Morty on Fortnite, I think it might interest you to know more about this possibility.

Well, the Rick Sanchez skin has arrived on Fortnite theJune 8 2021, simultaneously with the release by Epic Games of the Season 7 of Chapter 2 of the game. After Lara Croft of Tomb Raider and Neymar Jr, arrived in Season 6, now it is therefore the turn of the character of the well-known American animated series.


This is certainly an interesting landing, as, unlike many other characters arrived in the past, Rick Sanchez obviously has a very different look from that of the game graphics, as it maintains the style seen in "Rick and Morty", generating a contrast that in some ways can also "displace".

On the other hand, a skin, or a "costume", must also guarantee a certain originality and therefore Rick is perfect to distinguish himself from the other players (unless everyone decides to get his costume, of course, but generally in games online there are many who keep basic or "out of date" skins).

In addition to this, clearly the fans of the animated series can only appreciate the arrival of such a character within Fortnite, which among other things represents a novelty that not exactly everyone expected.

The rumors that preceded the release of Season 7 of Chapter 2 of the title of Epic Games focused in fact mainly on 'arrival of the aliens, given that some players had been "kidnapped" during some games and the only official information released by the developers was moving in this direction.

In any case, eventually the aliens did indeed arrive. In fact, Season 7 has a "subtitle" that doesn't need too many explanations: Invasion. Put simply, the aliens have decided to infiltrate the Island, obviously together with theirs futuristic technologies.

Users can, therefore, "kidnap" opponents with flying saucers, use reconnaissance scanners, annihilate opponents with powerful laser and so on. In addition, there is also an important news related to the reward unlocking mechanism, since it is now in fact possible get them in the order you prefer through star system, which I will explain later.


In any case, the fundamental requirement to get the Rick Sanchez skin, as well as the others that I will cover in this guide (for example, Kimera), is to have the Battle Pass of Season 7 of Chapter 2. The closing date of the latter is set for 12 September 2021, so be sure to follow the directions in correct time frame.

In case you didn't know, I remind you that the Pass Battle you can shop for 950 V-Buck, in its basic version, or for 2.800 V-Buck, in the bundle also containing 25 levels. V-Bucks represent the evaluate in-game, which can be obtained either through the Battle Pass rewards that through the micro-transactions. 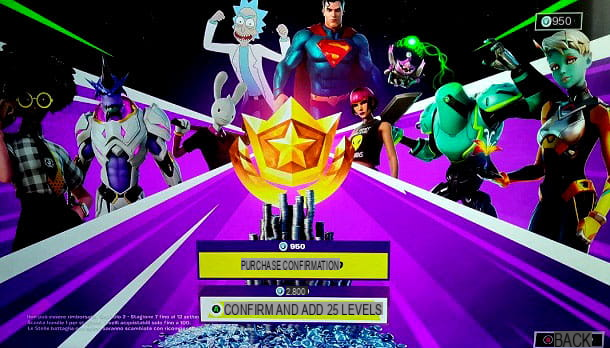 In any case, generally 1.000 V-Bucks cost € 7,99, so this is the amount that users usually spend to get the Battle Pass. You can find more details in my guide on how to get V-Buck on Fortnite.

Once you have the right number of V-Bucks, you can get the Battle Pass by simply accessing the main mode screen Battle Royale of Fortnite, by moving to the tab BATTLE PASSby pressing the button GET BATTLE PASS and selecting the box BUY BATTLE PASS.

After that, you will be asked which one Battle Pass type you want to buy: just press the button CONFIRM PURCHASE for the basic version from 950 V-Buck or on the key CONFIRM AND ADD 25 LEVELS for the bundle from 2.800 V-Buck.

Small note: the new star system, introduced in Season 7 of Chapter 2 of Fortnite, allows you to get some V-Buck for free, but you have to choose this reward e the number of "coins" obtainable in this way is limited.

For the rest, I remind you that there is also the subscription Fortnite Crew, which allows, upon payment of 11,99 per month, to obtain the Pass Battle, 1.000 V-Buck al mese and other exclusive benefits.

How to unlock Rick and Morty's Rick Sanchez skin on Fortnite 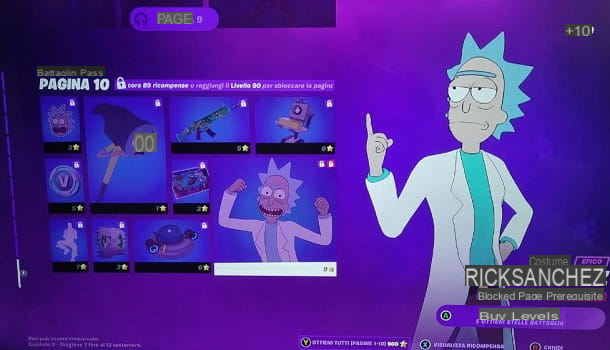 After showing you the context in which Rick Sanchez at Rick and Morty arrived inside Fortnite, as well as what are the requirements to achieve your goal, I would say that the time has come to explain how to actually get the "costume" of this character.

Having the Rick Sanchez skin on Fortnite is actually not that difficult, although it can take some time. In any case, actually some "headaches" could be caused by the new star system relating to the Battle Pass, which actually "upsets" the mechanism to which players have been accustomed so far.

You will surely remember what happened in previous Seasons, since the operation of the Battle Pass was very simple: you leveled up and each time you got a reward. Now this is no longer the case: we must get stars by playing and then you can choose at will which prize to unlock, using their own stars.

The rewards are however divided into various pages. Put simply, you have to achieve a certain level or unlock a certain number of awards to access the next page. Rick Sanchez's skin is clearly found in thelast page, or the tithe.

We must therefore unblock 90 rewards or reach the level 90 to access the page correct. After that, you will have to unlock all other rewards on the page and then spend 9 stars to get the "costume" of Rick Sanchez. In short, you have to play, get stars and reach the final part of the Battle Pass (obviously this skin requires the paid of the latter). 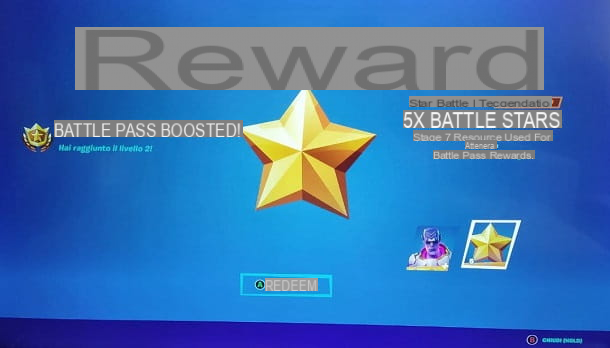 In any case, if you are wondering how to get the stars of the Fortnite Battle Pass, you must know that it is possible to do it simply leveling up. To be clear, they are usually provided 5 Stars Battle whenever you do this.

Of course, they also exist various challenges that allow you to obtain theexperience necessary a level up in Fortnite. You can take a look at the currently active ones by clicking on the button NEW ASSIGNMENTS present in the main screen of the Battle Royale mode.

Here you will find the challenges that the various characters, including Rick Sanchez himself, will ask you to perform to obtain various rewards (including experience). In short, now you know everything there is to know about the method of unlocking the skin involved.

How to set up Rick Sanchez skin on Fortnite 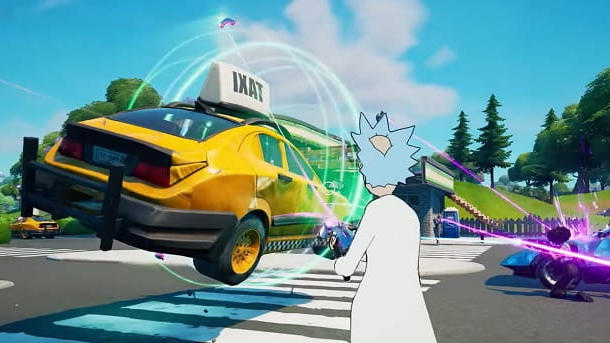 How do you say? You managed to get the much coveted skins on Rick Sanchez within the Epic Games title and would you like to use it? No problem, I'll explain right away how you can show it off in your Battle Royale matches.

Once you have obtained the skin through the method illustrated in the previous chapter, you just have to go to the main screen of the mode Battle Royale Fortnite, move to the tab LOCKER, press oncostume icon, that is the first one in the upper left, select the skin of Rick Sanchez and press the button SAVE AND EXIT.

Perfect, now just start any one Partita and you'll play as the iconic character from the animated series Rick and Morty.

How to unlock Kimera in Fortnite (alien artifacts) 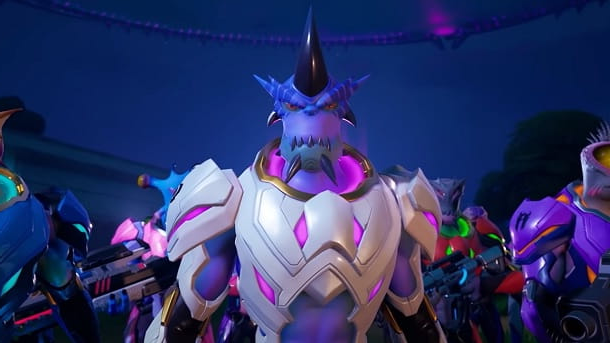 How do you say? You are wondering how to unlock the alien skin on Fortnite? In this case, I must correct you: it is a 'aliena mutavolto (Epic Games itself defines it this way). I obviously refer to Kimera, another of the main skins of Season 7 of Chapter 2.

You must know that the procedure is particularly simple: it is enough for you purchase the Battle Pass of this Season and the game will give you the Kimera costume. Put simply, all you have to do is follow the directions I outlined in the preliminary chapter to achieve your goal.

However, there is also the option of find alien artifacts. The latter can then be used to obtain styles for Kimera. If you want advice on where to leave, I recommend you go to the "Lake" in the center of the map, surrounded by ground viola (to be clear, to the right of Scaled suburbs).

Here you will find a nice surprise and you can start with your search. For the rest, you might also be interested in taking a look at the west of Gattogrill, as well as to an area of campaign slightly lower left than Foschi Fumaioli (as well as a north of Podere Pannocchia). Also, another area to start from is located under holly hedges. 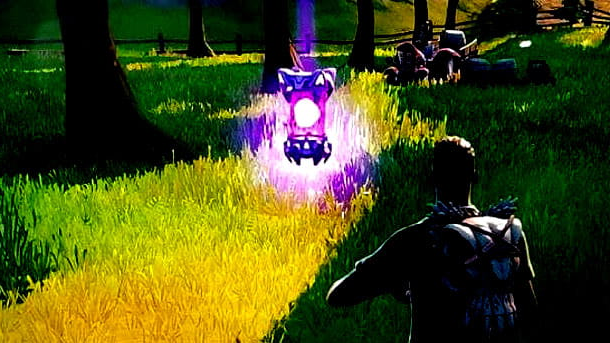 In short, now you have a bit of all the indications of the case relating to Kimera: in the end, the aliens really arrived on Fortnite. For the rest, I want to remind you that Season 7 of Chapter 2 of Fortnite also brought with it other skins. Among these, one of those that stands out the most is certainly that of the synthetic artist Guggimon (page 4 of the Battle Pass).

For the rest, since you are a fan of the Epic Games title, I would recommend that you take a look at the page of my site dedicated to Fortnite, where you can find many other tutorials that could potentially be interesting.

This work is under Creative Commons Attribution-NonCommercial-NoDerivatives 4.0 International License. 2022 / kingsfortnite.com