How to unlock Neymar Jr on Fortnite

Fortnite is one of the most popular video games ever. Known as one of the main titles belonging to the Battle Royale genre, even if in reality it was not quite like this at the beginning, the Epic Games game has achieved such popularity that it can afford to include characters of high caliber, coming a little from all the most famous narrative universes.

However, Fortnite has very high ambitions and therefore has not limited itself to this. Between concerts by internationally renowned artists performed within the Party Royale mode and partnerships with real personalities, there is everything and more. Speaking of which, you've heard about the possibility of unlock Neymar Jr on Fortnite and you would like to know how to do it.

Well, they didn't lie to you: the popular footballer has actually landed, obviously in a virtual way, within the title of Epic Games, and this guide is just for you if you want to know more. In fact, I will examine the situation as a whole, illustrating all the steps to follow. If you are ready to proceed, below are all the relevant information. There is nothing left for me to do, except wish you good reading and have fun! 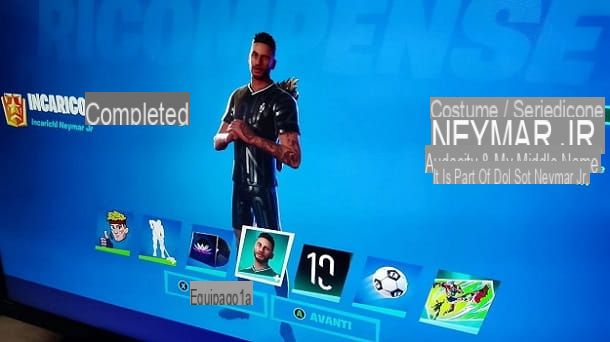 Before going into the details of the procedure on how to unlock Neymar Jr on Fortnite, I think it might interest you to know more about this possibility.

Well, the costume dedicated to the well-known footballer arrived in the Epic Games title on the day of April 27 2021. The latter was "accompanied" by various primordial forms, which in other words are modified skins that “transform” the player.


Obviously, being the morals, this last they are not going to change the gameplay, although in the presentation trailer we see the player "transform" into one of his primordial forms and kick a bomb directly into the enemy building, causing it to explode.

In the game, it's just about elementi esthetic, as indeed happened in the past with characters like The Mandalorian. By the way, just as happened with the latter, also for what concerns Neymar Jr Battle Pass required in order to unlock the appropriate costume and access the tasks.

More precisely, you must have the Battle Pass of the Season 6 of Chapter 2 of Fortnite, or the one relating also to Lara Croft of Tomb Raider, which began on March 16, 2021 and with a deadline set forJune 8 2021 (last day also to get Neymar skin). So be careful to follow this tutorial during the promotional period involved, otherwise the player's costume may no longer be available.

I remember that Pass Battle can be purchased a 950 V-Buck in its "basic variant". If, on the other hand, you want to have also 25 levels included, the price is 2.800 V-Buck. In case you didn't know, V-Bucks are one virtual currency interna al titolo at Epic Games.

These "coins" can be obtained by both playing and exploiting the free Battle Pass rewardsThis method, however, can take a long time, as well as several seasons, to reach the necessary V-Buck, or by means of micro-transactions. To be clear, in general 1.000 V-Buck they cost 7,99 €. More details here.

Il payment relating to micro-transactions obviously depends on the platform you usually play from. Just to give you a concrete example, if you are using a console PlayStation, you might be interested in taking a look at my tutorial on how to pay on PlayStation Store.

In any case, this is generally not too complex: just set a valid payment method, in case you haven't already done so, then confirming the transaction. In short, you shouldn't have too much trouble completing this operation.

In any case, once i V-Buck, to purchase the Battle Pass you just have to start Fortnite, go to the main screen of the mode Battle Royale, move to the tab BATTLE PASS, present at the top, and first press the button BUY BATTLE PASS and in no time his quello BUY.

After that, you may be prompted to press the key CONFIRMATION to get the “basic” Battle Pass a 950 V-Buck or alternatively on that CONFIRM AND ADD 25 LEVELS, in order to purchase the “bundle” from 2.800 V-Buck.

Perfect, now that you have the Battle Pass of Fortnite Chapter 6 Season 2, you have all the requirements to obtain the aesthetic elements related to Neymar.

How to unlock Neymar Jr on Fortnite

After having explained the general situation and all the requirements of the case, I think it is time to take action and explain how to actually obtain the skins on Neymar Jr inside Fortnite. Below you can find all the details of the case, both in relation to the "basic costume" and the other possibilities offered by the game.

How to get the Neymar skin on Fortnite 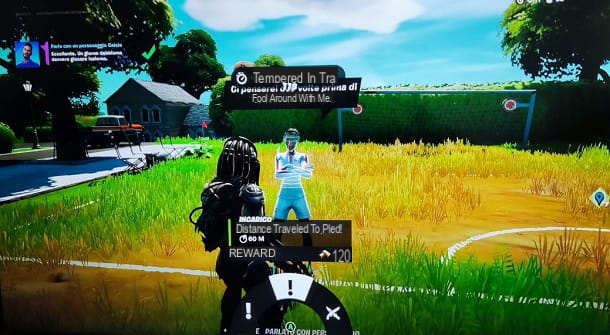 Starting from the element probably most "coveted" by the players, the skins on Neymar Jr you get it on Fortnite by completing various challenges proposed by the game, which are obviously unlocked once the Pass Battle (as explained in the preliminary chapter).

Don't worry: this isn't anything that complicated, as there are no weekly objectives or boss missions whatsoever (as has been the case in the past). Simply, you have to finish 5 assignments of the players on the island.

Put simply, they have arrived within the game map of the football-loving characters. The mechanics are the same as in the previous Seasons: while you are doing a Battle Royale, you can come across some NPC (non-player characters), marked withfumetto icon.

If in the past it was possible to activate, for example, bounties through them, now patter with football-loving NPCs it's possible get assigned missions. For example, some characters may ask you to walk a certain distance, while another might tell you to hit a target with l 'emote Soccer ball.

The latter is obtained, together with the Neymar Jr . standard, the first time you talk to a character of this type. In short, the important thing is to play in Battle Royale, talk to NPC (only those who love football, not others) and carry it out 5 missions provided by the latter, choosing the ones you think are simpler. 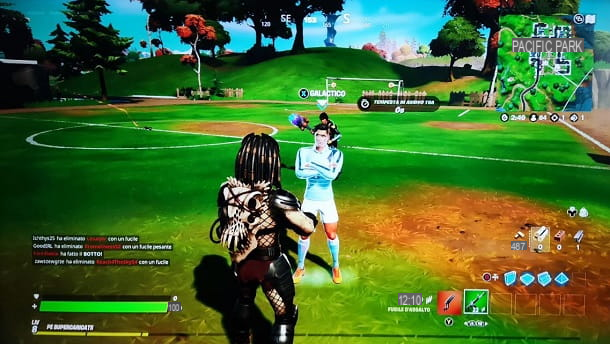 Going into more detail, the positions of the 3 soccer fields, in which i 3 NPC to interact with, are: Holly hedges, Pacific Park e Moli Molesti. By going to these locations, which you can find on the map, you will easily be able to locate the various ones characters, as they are marked withfumetto icon.

Generally the requests from NPCs they are essentially three: walk for a while, score a goal o hit a target present in the corner of the football goal. Sometimes the characters ask to challenge them, but I advise you to avoid this, as the others are very simple missions.

The only advice I can give you is to access thelocker (you can also do this at the end of a game using the appropriate quick button) and select the toy Soccer ball, so that your character always has it available.

By doing so, when you are close to one of the soccer goals, which are located right where the aforementioned are NPC, you can simply use this element to score or hit targets (I remember that, come on consul, to access these elements you must hold down the button of the down arrow of the controller, then selecting what you want to do).

Alternatively, if that doesn't work, I recommend that you try thespecial soccer ball emote (always accessible by pressing the down arrow on console). 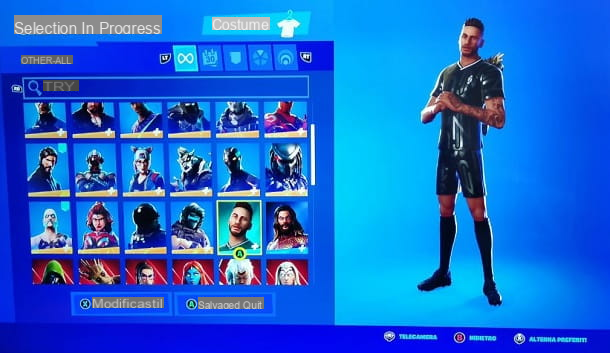 For the rest, once obtained the skin, to set it you need to go to the tab LOCKER, press on costume box, that is the first in the upper left, and select the skins on Neymar Jr, then confirming their choice.

How to complete Neymar's tasks in Fortnite 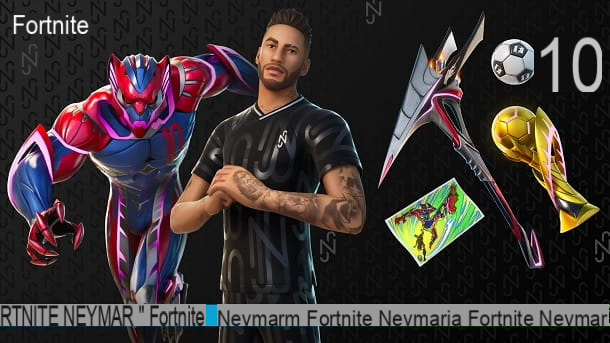 How do you say? You have unlocked the Neymar Jr skin on Fortnite but would also like to get the other aesthetic elements dedicated to the footballer? No problem, I'll tell you how to do it right away!

In this case, the elements most "coveted" by users are obviously the primordial shape skin seen in the trailer mentioned in the preliminary chapter. You must know however that in reality it is not really a question of customs, as these forms are activated by means of a specific emote.

In any case, having the latter is very simple: just set the skin of Neymar Jr obtained previously ed eliminate 3 opponents as the footballer.

In short, you simply have to play your games on Fortnite and try to perform 3 kills. You will see that you will not have particular problems in obtaining theemote Shhh, which you can then use to "awaken" them primordial forms of the football player. 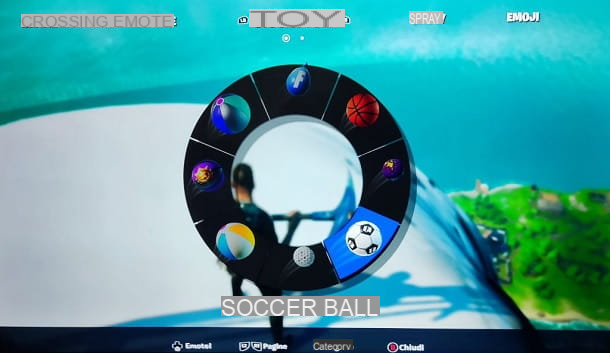 For the rest, other elements that can be obtained are the Joia Trophy decorative back, which requires the player to use the toy Soccer ball as Neymar Jr doing "Go down" the ball for 500 meters, and the Jaguar Strike pickaxe, which instead requires you to score a goal.

To complete these missions, just use the soccer ball toy or the "associated" emote, which I explained to you how to set in the previous chapter. As for the 500 meters to reach the ball, in reality it is often enough to go to an area where there is one slight slope and continue to throw the ball several times, perhaps shifting the view every time.

How to unlock Neymar (Exhibition) in Fortnite 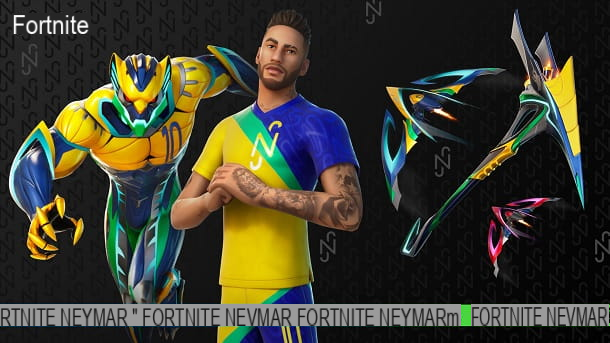 If you thought the Neymar-related items ended up with the football-loving NPC assignments, you're wrong. In fact, within Fortnite there are other rewards related to the player, including a variant of the basic skin called Neymar (Performance).

Among other things, the latter also allows you to access another primordial form, if combined withemote Shhh. In any case, to get this variant you have to complete 60 epic assignments from Season 6 of Chapter 2 of Fortnite.

I remind you that the epic assignments are the ones in purple coloring which you can find by pressing the button NEW ASSIGNMENTS, present in the main screen of the mode Battle Royale of the game. In short, just follow the instructions on that page during the Season.

For completeness of information, you must also know that, always completing a certain number of epic assignments, you can get it spray I'm ready,emoticon Stealth strike, hang gliding Acrobat of the air and l 'emote Hang Loose Rejoicing.

In short, now you know a little everything there is to know about the possibilities related to Neymar within the title of Epic Games. For the rest, since you are a fan of the latter, I would advise you to take a look at the page of my site dedicated to Fortnite. In fact, in the latter you can find many other tutorials that could be for you.

add a comment of How to unlock Neymar Jr on Fortnite

This work is under Creative Commons Attribution-NonCommercial-NoDerivatives 4.0 International License. 2023 / kingsfortnite.com